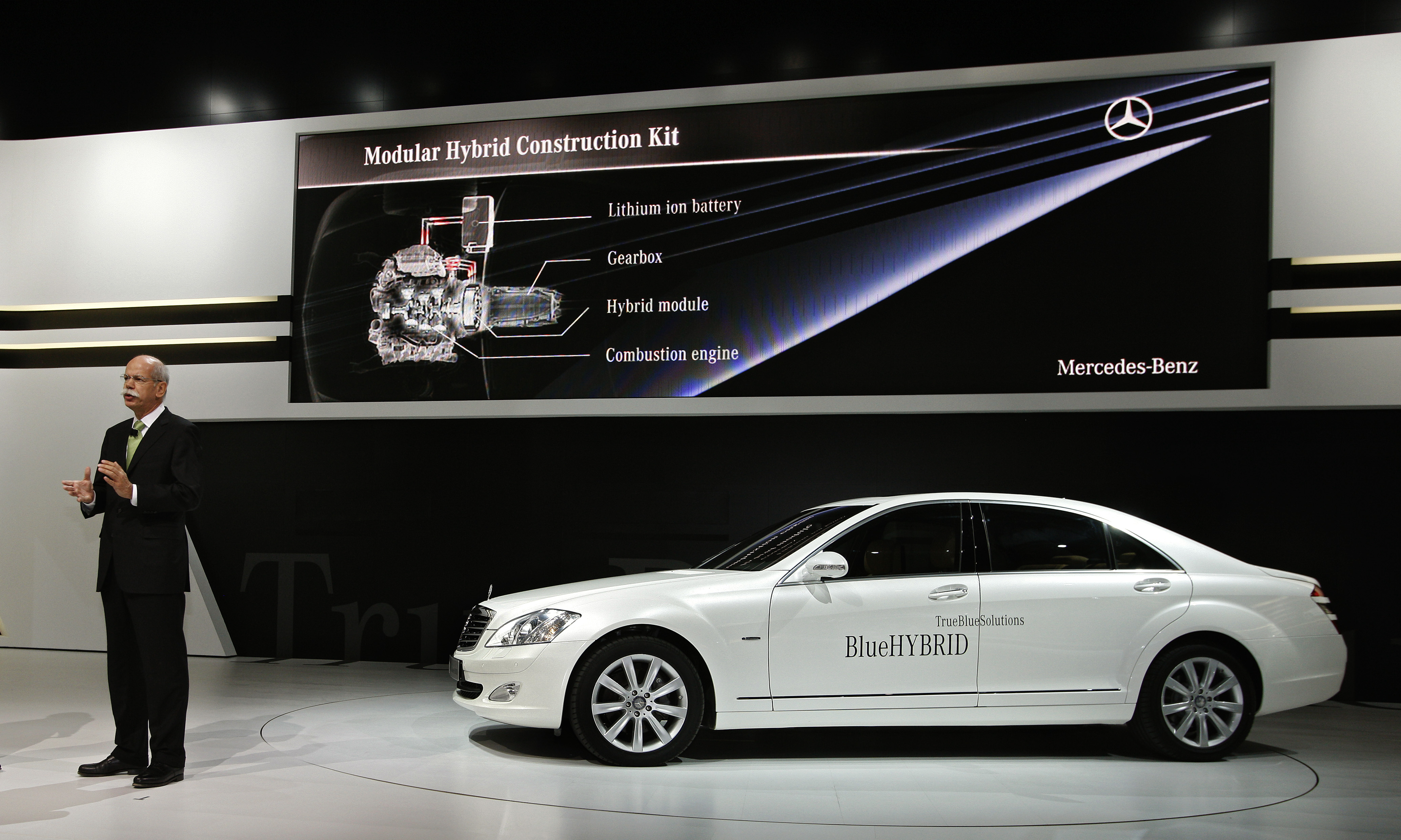 Mercedes-Benz is launching the S 400 BlueHYBRID, its first passenger car model equipped with a hybrid drive system, in summer 2009. The combination of a modified V6 petrol engine and a compact hybrid module makes the S 400 BlueHYBRID the world’s most economical luxury saloon with a petrol engine.
The NEDC combined fuel consumption is 7.9 litres per 100 kilometres. This makes for the world’s lowest CO2 emissions in this vehicle and performance class – 190 grams per kilometre. These exemplary figures go hand in hand with assured performance. The 3.5-litre petrol engine develops an output of 205 kW/279 hp, the electric motor generates 15 kW/20 hp and a starting torque of 160 Nm. The result is a combined output of 220 kW/299 hp and a combined maximum torque of 385 newton metres.

The compact hybrid module is a disc-shaped electric motor that also acts as a starter and generator. The system offers a double benefit, as it both helps to save fuel and increases driving enjoyment. This is partly due to the booster effect of the electric motor, as it powerfully backs up the petrol engine with a maximum additional torque of 160 newton metres during the high-consumption acceleration phase. The S 400 BlueHYBRID accelerates from 0 to 100 km/h in 7.2 seconds, and reaches an electronically limited top speed of 250 km/h.

The hybrid module also has a comfortable start/stop function, which switches the engine off when the vehicle is at a standstill – for example at traffic lights. When it’s time to move off again, the electric motor almost imperceptibly restarts the main power unit. This likewise makes a contribution to fuel economy and environmental protection: because the engine restarts first time, and practically instantly, emissions are also minimised during the starting phase.

When the vehicle is braked the electric motor acts as a generator, and is able to recover braking energy by a process known as recuperation. Working in finely tuned partnership, the electric motor supplements the braking effect of the petrol engine and the wheel brakes to deliver a smoothly progressive braking action. The recuperated energy is stored in a compact yet highly efficient lithium-ion battery in the engine compartment, and made available when required. This complex system is managed by a high-performance control unit, which is likewise located in the engine compartment.

Milestone on the Road to Electrification
The center piece of the modular, very compact and highly efficient hybrid drive system is the new high-voltage lithium-ion battery, which was specially developed for automotive use and is the first such unit worldwide to be introduced in a series-production vehicle. In this way Mercedes-Benz is making a trailblazing contribution to the electrification of the car, with the S-Class playing the role of the technological trendsetter.

Major advantages over conventional nickel/metal hydride batteries include a higher energy density and better electrical efficiency, together with more compact dimensions and a lower weight. Thanks to space-saving installation in the engine compartment, where it replaces the conventional starter battery, the interior space and boot capacity of the S 400 remain unchanged.

The 2009 S400 BlueHYBRID will be Mercedes-Benz’ first hybrid passenger car and also the first mass-production hybrid with a lithium-ion battery that’s been specially developed for automotive use. The S Class hybrid will go sale in Europe in June 2009 and be available in the U.S. three months later.

Based on the S350, The S400 BlueHYBRID has a 3.5-liter V-6 gasoline engine mated to a 7G-TRONIC seven-speed automatic transmission with reprogrammed management software for the hybrid application. It also has a new auxiliary oil pump for transmission lubrication even when the engine is switched off.