Oil Obit News/Daimler PR/Stuttgart/January 15, 2009: The ADAC (German Automobile Association) has awarded its “Gelber Engel 2009” (Yellow Angel) to Daimler AG and its systems partner Continental in the Innovation & Environment category. The Stuttgart carmaker was selected for the award by Europe’s largest automobile club in recognition of its lithium-ion battery, the first such battery ever to be successfully integrated into a production passenger car. The Mercedes-Benz S 400 BlueHYBRID featuring this pioneering technology will have its market launch in summer 2009. 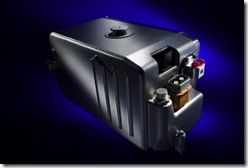 The Stuttgart-based company is the world’s first carmaker to successfully adapt lithium-ion technology – currently used predominantly in consumer electronics – to the heavy demands of production passenger cars. Daimler AG holds a total of 25 patents that collectively facilitated the breakthrough in this important technology. A crucial element in the company’s success was its groundbreaking integration of a lithium-ion battery into the vehicle’s air-conditioning circuit. As a result of this, the battery unit is able to operate at optimum system temperatures between 15-35°C at all times, thus achieving a long service life for use in passenger cars (10 calendar years; 600,000 charging cycles) coupled with maximum efficiency.

Dr. Thomas Weber, the member of the Board of Management of Daimler AG responsible for Group Research and Development Mercedes-Benz Cars, accepted the “Yellow Angel” award together with Heinz-Gerhard Wente, member of the Board of Management of Continental AG responsible for Human Resources and the ContiTech Division. Daimler’s lithium-ion technology was chosen as the year’s top innovation out of 51 applications from 42 companies by a jury comprised of experts from the ADAC, the German Association of the Automotive Industry (VDA), the Association of Motor Vehicle Importers (VDIK) and the German Association for Motor Trade and Repair (ZDK). The number of entries was the highest since the ADAC “Yellow Angel” awards were introduced.

The innovative battery will be launched in the new Mercedes-Benz S 400 BlueHYBRID as early as summer 2009. The combination of the V6 petrol engine with the compact hybrid module will make the S 400 BlueHYBRID the world’s most economic petrol-engined luxury saloon. NEDC (combined) fuel consumption amounts to just 7.9 litres per 100 kilometers, giving world-best figures for CO2 emissions of just 186 grams per kilometer for this category of vehicle and output. In conjunction with an intelligent energy management system, the new model offers a comprehensive range of hybrid characteristics, including a user-friendly stop/start function for the petrol engine, boost effect and regenerative braking.

The advantage of the lithium-ion battery over conventional nickel-metal hydride batteries lies principally in its compact dimensions combined with much greater efficiency. Compared with NiMH technology, lithium-ion batteries better energy density by 30 percent and power-to-weight ratio by 50 percent. Moreover, they boast a high recharge efficiency and long service life. Lithium-ion batteries also have the lowest environmental impact of all battery technologies and guarantee a sustainable and cost-effective feedstock. Their high safety levels are on a par with those of current car batteries.

As Mercedes-Benz’s system partner, the international automotive supplier Continental was responsible for software development and overall system application. A complex battery management system ensures the battery remains within an optimum operating range at all times. The electronics also monitor general functions such as temperature and energy output as compared with battery age. Safety circuits prevent the battery from overheating, for example, and a ‘cell supervising circuit’ monitors individual cells so as to guarantee optimum interaction. Production of the battery will be overseen by Continental at a new production facility in Nuremberg.

In its Innovation & Environment category, the ADAC recognizes outstanding initiatives, projects or innovations in the fields of road and vehicle safety and environmental protection in road transport and automotive development. Application is open to institutions, organizations, institutes and companies. A basic requirement is that all innovations have already been successfully put into practice.

In 2006 Mercedes-Benz received the prestigious award in the Innovation & Environment category for the world’s cleanest diesel technology BlueTEC, achieving the same feat again in 2007 for its Active Brake Assist for trucks.

“Yellow Angels 2009” were awarded in five categories: Car, Brand, Quality, Innovation & Environment and Personality. They are considered one of the most prestigious European car awards and looked upon by consumers as valuable yardsticks, since they take into account criteria such as price-performance ratio, practicality, economic efficiency, safety and environmental compatibility.