ACORE is pumping out the PR now that Congress is poised to either let die or renew a provision created by the staff of the U.S. House of Representatives Ways & Means Committee in January 2009. The provision being considered in the pending tax bill will potentially support or inhibit renewable energy projects in 2011. It appears California, Arizona, and Wyoming stand to gain the most based on an analysis prepared by the US Partnership For Renewable Energy Finance (US PREF)..

Congress Poised to Save $25 Billion of Renewable Energy Projects in 17 States;
Key Vote Due on the “1603” Incentive for American Entrepreneurs;

California, Arizona and Wyoming to Stand to Benefit the Most

December 14, 2010 – Washington, DC: The US Partnership For Renewable Energy Finance (US PREF) introduced an analysis that a provision being considered in the pending tax bill stands to save at least $25 billion of renewable energy projects in 17 states in 2011, among which California, Arizona, and Wyoming stand to gain the most. 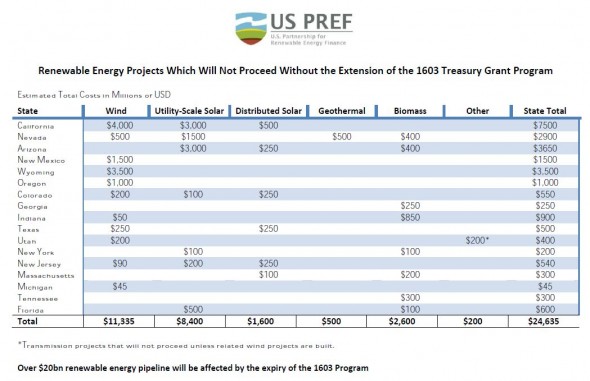 The issue is a technical change in earlier law about tax credits for renewable energy projects, allowing project owners to opt instead for a cash grant.  This provision was created by the staff of the U.S. House of Representatives Ways & Means Committee in January 2009, in the depths of the financial crisis, as a way of keeping the development of renewable energy projects going in the country.  It gives the U.S. industry and entrepreneurs flexibility in using the long-standing production and investment tax credits (PTC/ITC). This approach worked.  This innovative provision proved to be “good public policy” but it expires on December 31, 2010.  The question remains as to whether or not Congress will extend this provision in light of the fact that the financial crisis is continuing in many sectors of the economy.

The PTC/ITC programs were first enacted in 1992, and have been modified and enhanced on a bipartisan basis.  As a result of the recent recession and associated financial crisis, the tax equity market for these credits was reduced by as much as 67% from recent market levels and is expected to remain well below these levels for the next two years.  The technical change in 2009 provided important market flexibility producing a huge expansion in U.S. renewable energy investment and generation.

US PREF has been leading an educational campaign since May 2010 about the effectiveness of this Treasury Grant Program (TPG), arguing that it is the most important provision in recent times.

“The TGP has been highly effective in driving nearly $9 billion of new private sector investment in U.S. renewable energy projects at a time of financial crisis,” said Jeff Holzschuh, Vice Chairman of Morgan Stanley and Executive Committee member of US PREF.  He added, “Congress enacted a temporary and effective solution to ensure renewable energy credit programs continued to operate as intended.”Marshal Salant, Managing Director at Citi, added, ” Without question, the TGP has been the most effective and successful national policy to promote renewable energy investment and deployment. Continued access to the TGP is urgently needed to maintain investment in renewable energy projects, promote U.S energy independence and security, and protect and create U.S. jobs.”

“The credit environment has not recovered from the financial crisis sufficient enough to meet growing market demand for renewable energy project investment,” said Pat Eilers, Managing Director of Madison Dearborn Partners and an Executive Committee member of US-PREF.  He added, “The policy flexibility allowed for the effective use of the PTC/ITC tax credits, and is essential for continued market growth.  It will lead directly to $30 billion in additional U.S. private investment in domestically generating renewable power and 200,000 new, high-quality jobs.”

“Extension of the Section 1603 Treasury Cash Grant Program will keep dozens of renewable energy projects going in our country, keep over 100,000 people employed on those projects, and keep President Obama’s pledge to double the production of renewable energy in three years,” said Michael Eckhart, President of ACORE. “It would help larger-scale projects if the TGP can be extended two years to the end of 2012.”

The American Council On Renewable Energy (ACORE), a 501(c)(3) membership non-profit organization headquartered in Washington, DC, is dedicated to bringing renewable energy into the mainstream of the U.S. economy and lifestyle through research and communications programs and membership committees. ACORE’s membership works in all sectors of the renewable energy industries including wind power, solar energy, geothermal energy, hydropower, ocean energy, biomass, biofuels, and waste energy.  ACORE provides a common platform for the wide range of interests in the renewable energy community including end users, technology companies, manufacturers, utilities, professional service firms, financial institutions, colleges and universities, associations, non-profit organizations and government agencies. ACORE serves as a thought leadership forum through which these parties work together on common interests. ACORE co-organizes the REFF-Wall Street and REFF-West Finance Conferences, the RETECH All-Renewables Energy Conference and Exhibition, the Phase II National Policy Forum in Washington, DC, and hosts both domestic and global policy events furthering the mission of renewable energy.  Additional information is available at www.acore.org.

Policy, financial, and technology leaders set the stage for an era of new collaboration to advance renewable energy in America

At ACORE’s Phase II Policy Forum held on Capitol Hill, Michael Eckhart, President of ACORE, explained that the balance of power for the upcoming 112th Congress, where the House of Representatives and the White House are held by different parties and the Senate has a near equal split between Republicans and Democrats, is the pattern that has historically been the most productive in terms of generating legislation.

“This summit has set the table for a productive legislative session and has already shown results for bi-partisan cooperation as well as forging new cross-industry collaboration,” Eckhart said.

The Phase II Policy Forum laid the groundwork for a new, bi-partisan renewable energy policy platform of commitment, innovation, finance and education.  Featuring industry and financial experts in addition to key lawmakers representing both the conservative and liberal agendas, the Forum presented an opportunity to find common ground on the critical issues facing renewable energy: jobs and economic development, national security, and the environment and climate.

Four major developments were announced at the Forum. The first came from U.S. Representative Chris Van Hollen (D-MD) who declared in the Forum’s afternoon session that it looked like Republican leadership was going to include a successful policy adjustment (known as the 1603 cash grant in lieu of tax credits) into the Tax Extenders Bill. ACORE and its program, the US Partnership for Renewable Energy Finance (US PREF), have urged Congress to extend the 1603 cash grant program because of its positive impact on American jobs and businesses.

“The leadership of ACORE and NGSA have agreed to promote a collaborative industry effort to identify federal policies that may be hampering natural gas and renewable partnerships in competitive power markets,” Eckhart said.  “We have a couple of preliminary ideas and are excited to explore those and others in pursuit of options that align the industries and contribute to a stable and well-functioning electric grid.”

FERC Chairman Jon Wellinghoff indicated support for the concept, indicating that there is potential to further the deployment of utility scale renewable energy by partnering those projects with natural gas combined cycle plants. In addition, Chairman Wellinghoff expressed interest in assessing the feasibility of the Renewable Energy Standard Offer (RESO) proposal put forward by ACORE.

Also in the renewable fuels arena, Jeff Broin, President of the large ethanol producer, POET, called for a redirection of the ethanol tax credit to fund distribution infrastructure, and for all vehicles sold in the U.S. to have more flex fuel capability.

The Forum was webcast live by Verizon and replays of the discussions are available at www.acorephaseii.com