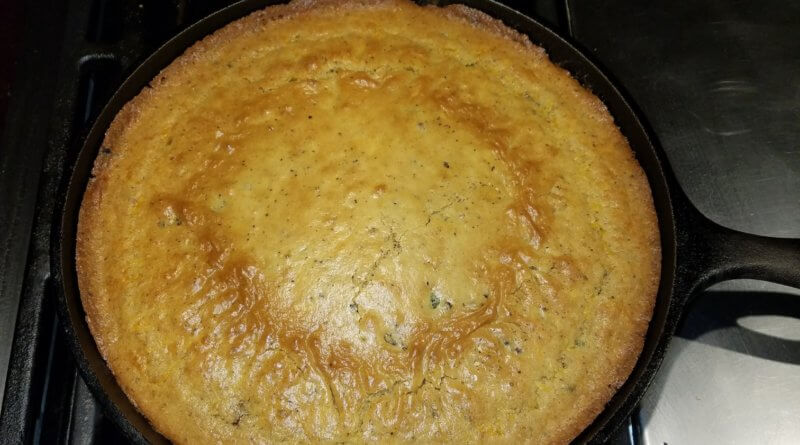 Years ago, I discovered Pati Jinich’s Skillet Poblano Bacon Cheddar Cornbread recipe. It is a hit with friends and family, but I do modify her version slightly and I’ll explain why. Pati’s recipe is great and a real winner. She knows how to make excellent, authentic Mexican food. But after making her cornbread recipe more than a few times, I altered the recipe a bit to cut down on the bacon fat for one. And, I omit the corn kernels as well as add a few extra spice. Either recipe you chose, you’ll enjoy Poblano Bacon Cheddar Cornbread recipe.

The bacon is a must for this recipe but don’t overdue it with the bacon grease. It does make it moist, but heavy. I think it tastes lighter with less bacon grease in the batter especially if you use fatty bacon that creates a ton of grease. I use thick bacon slices that are meaty; cheap grocery store bacon isn’t the way to go on this one. Another thing I found is cleaning out the skillet after cooking the bacon helps the other flavors in the cornbread stand out. I clean the skillet then add back a few teaspoons of bacon fat. It hasn’t stuck to the skillet yet and the bottom is crusty and delicious.

Additional spices you might want to consider are oregano and smoked paprika. It really adds to overall flavor, which can get drowned out by the bacon grease if you use too much. Roasting the poblano peppers is also a must, although I don’t always use three of them. One or two works with a little bit of hot pepper flakes added. The poblanos aren’t spicy hot anyway after the seeds and veins are removed. Cayenne pepper also works if you can’t find really fresh poblanos at your local grocery store.

I found the recipe serves six and not 10 as claimed by the Washington Post article that quotes Pati’s recipe also.  Everyone wants more and there isn’t ever enough for 10 people unless they are kids; the adults want a big slice. 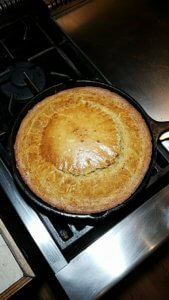 Place the poblanos directly on a gas burner over medium-high heat or broil them in the oven (that’s what I do). Turn them once they start getting charred; 6-8 minutes in the broiler. Don’t walk away and keep turning them so all sides are charred.

Place the poblanos in a bowl and cover tightly (or put them in a plastic ziplock bag). Once cooled, remove the blackened outer skin, which should almost fall off when scraping with a knife. Remove the stem, ribs and seeds. Don’t remove the skin by running them under water, you’ll lose a lot of the flavor. Dice the poblanos and set aside.

Preheat the oven to 375 degrees.

Cook the bacon in 9- or 10-inch cast-iron skillet until crisp. Place the bacon plate with paper towels to drain. Turn off the heat and leave the bacon fat in the skillet.

Whisk together the milk, cream and eggs in a separate container, then stir it into the cornmeal mixture until just incorporated. Add the diced poblano, cheese and corn (I don’t add corn FYI). Crumble the bacon and add it to the bowl. Pour all but a few tablespoons of the rendered bacon fat from the skillet into the batter, stir mildly to mix it into the batter.

Heat that same skillet over medium heat. Once the bacon fat shimmers, pour the corn bread batter into the skillet. Transfer the skillet to the oven; bake for 30 to 40 minutes or until golden brown and a toothpick inserted into the center comes out clean.

I hope you enjoy it! It is a real hit and I’ve made it many times.