To improve the water quality in our home, I purchased and installed a “Scale Blaster” when it was the “deal of the day” ($270) at Home Depot about a month ago. A Scale Blaster isn’t considered a traditional water treatment device; in reality it isn’t a water treatment device at all. It is an electronic water “conditioning” device that reduces the affects of hard water. As a licensed professional geologist, I can tell you hard water is formed when groundwater percolates through deposits of calcium and magnesium-containing minerals (i.e., limestone, chalk and dolomite). So how does the technology of a Scale Blaster make my water better? 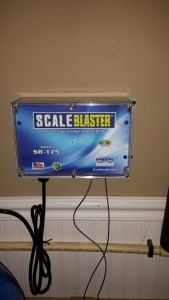 The Scale Blaster produces an oscillating electronic field (modulating frequency wave form) that changes the physical shape, size and charge of calcium molecules. It does not remove the calcium, or anything else, from the water per se. It causes the  calcium molecules to lose their adhesive properties which in turn makes your water feel and act softer. Soap lathers up easier and you can use less detergents. It works by reducing calcium’s ability to stick to things such as your water pipes, appliances, faucets, shower heads, sinks, toilets, skin, dishes, glassware, etc.

Calcium deposits are generally referred to as limescale; limescale is a prime breeding ground for bacteria. The Scale Blaster causes existing limescale deposits to “let go” of whatever they are clinging to (your water pipes, water heater, faucets, sinks, etc.). Less limescale means less grime and less bacteria.

Although we didn’t have particularly “hard water” (extremely high concentrations of Ca & Mg), adding the Scale Blaster does appear to be working well for us. The water tastes better and the sinks & faucets appear to be cleaner after using the Scale Blaster for about 3 weeks. Don’t expect immediate results. The science takes a little time to work on the deposits in water pipes and fixtures. The manufacturer claims 90-days is the norm for cleaning out everything. Our goal is to extend the life of our energy-efficient hybrid water heater, dish washer, and washing machine which should accumulate fever water deposits over time. Reducing limescale deposits improves the efficiency of your water heater, fixtures, and appliances – less maintenance, prolongs their life, and lowers your cost to run them.

operates without the need for chemicals or salt, making it a healthy option for individuals that don’t want more salt in his or her diets. In addition, no chemicals or salt means less money spent on water treatment over time. Traditional water softeners require salt, waste water and they discharge chlorides into the environment. IMHO, the Scale Blaster is a smart solution for hard water that saves money.